Hach Ahmed: The movement responds to a historical need, because it introduces democracy into Saharawi society. 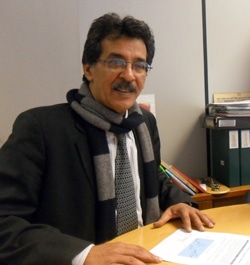 The first secretary of the Saharawi movement for peace, Hach Ahmed Barikala, underlined the political context in which the movement “Saharawis for Peace” was born.  The Saharawi people have been in a state of emergency for many years, considering it “a historical necessity to fill the void left by the absence of a political force expressing the aspirations of a large part of Saharawi society”.  The Polisario Front is a large group that is far from feeling represented in the practices and management formulas of the Polisario.

The first secretary of the movement clarified in a speech delivered yesterday, Thursday, and addressed to the members of the movement, which include the 100 signatories of the founding declaration and the new members who have joined it: “… that the Polisario went from being a libertarian movement to becoming a simple political party that adopts a single-party system.

“The existence of a new framework in the 11th century is natural, given that our society has the right to live in democracy and freedom, and that with the exception of Rabuni and North Korea, there is no system of government in the world that at this point in time still adopts a single-party system,” explains Hach Ahmed in his speech.

“The foundation of the Saharawi Peace Movement”, adds the first secretary of the movement, “is the result of the many mistakes made by the Polisario Front over fifty years, especially with regard to the management of the conflict from the withdrawal of Spanish colonialism to the present day, where great historical opportunities were lost, especially the two offers presented by the Spanish colonial authorities in 1975 and Mauritania in 1979, as well as the way in which the cease-fire agreement was managed in 1991.

Hach Ahmed indicated that the movement will try and by peaceful means avoid the loss of further political opportunities that would contribute to an agreed political solution, putting an end to the suffering of the Saharawis.

In his speech, the first secretary of the movement praised all the members, whether they were the signatories of the founding declaration or the new members who later became involved in it, emphasising that the establishment of the movement was an important historical event and underlining the need for a positive contribution to the success of this project, “especially as the conditions have become conducive and appropriate for its success,” the spokesman explained.

Hach Ahmed also emphasized in the same context that “the movement is open to all Saharawis without any exception or exclusion”, and pointed out that “it seeks to involve the majority of Saharawis in it”, then emphasizing the need to involve young people and women, “it is the rising generations that will ensure the success of the project”.

previousThe Movement of “Sahrawis For Peace” appoints the members of its political bodies and elects its First Secretary
nextThe Movement of Sahrawis for Peace (MSP) urges its members and supporters to avoid the climate of hatred generated by radical discourse.